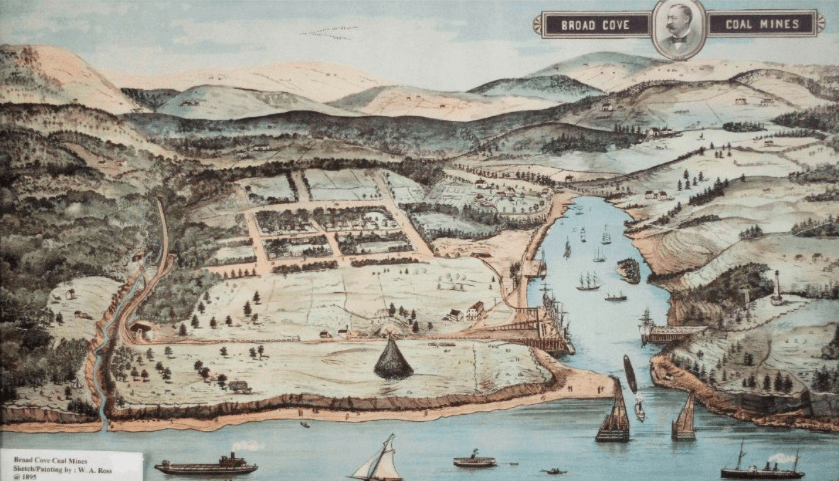 The community of Inverness was incorporated in 1904 and we celebrated the centennial of the village in 2004 in grandiose style. Settled in 1803 as a result of the outmigration of the Scots from their homeland as a result of forced resettlement, the area took on a farming community until the discovery of coal at the Big River resulting in a myriad of miners coming to the community from across Europe to find work in the Inverness Coal Fields. The mosaic of the community brought miners and their families from Scotland, Ireland, Belgium, Wales, England, France and Germany. With the increasing population, services to the throngs of miners and their families had to be erected including the miners rows of houses for accommodation, bars, shops, stores to fuel the workers and all the necessities including the company stores. The Shean began to take on the ambiance of a thriving community.

The agrarian nature of the community was not for export but to feed the farmers families and the fishing didn’t supplement a commercial fleet but to supplement the diet of the settlers.

The first indication that there were large coal deposits came in 1863 when John Beaton (Red) arrived from South West Mabou and purchased a farm from Alexander MacIsaac at the Big River. Alexander was the son of Donald MacIsaac who decided to emigrate to New Zealand after his wife died. John Beaton discovered the first regular seam of coal and exposed an excellent face of coal on his property. The community became excited because to this point coal was mined by pick and shovels on a very small scale along the Broad Cove Banks. Some families used the coal to heat their homes but the main use was to feel the local blacksmiths shop. At this point it was not a viable industry and did not warrant continued work on a large scale.

Rev. Hugh Ross, McCully and Blanchard attempted to commercially mine the coal but met with failure due to a series of reasons. It was not until the entrance of two Moncton men, HG Wright and JH Ladd that the first commercial shipments of coal were exported.

In 1872 they established a mining operation along the bank of the Big River and initiated a new era for Inverness and its inhabitants. They dammed the river and built lock gates in order to transport the coal by loading it on large scows capable of holding up to 11 tons and floating them to open sea and then loaded to vessels anchored in deep water. The coal leaving this mine was sold in Prince Edward Island.

This mining operation continues until 1880 when the wharf was destroyed in a major storm. The operation floundered until 1894 when a renewed interest in the mining became a reality. The quality of the coal was well known but the transportation of it had posed a problem since no transportation or hard was available and the world market was tenacious.

On the scene enters Willian Penn Hussey, a coal merchant from Danvers, Mass. In 1888, Hussey purchased the Boat Cove Mine property for $62,500 and took on the challenges of erecting a means to get the coal to market, establishing a wharf, a breakwater to protect the wharf and a small gauge railway to get the coal from Big River to MacIsaac’s Pond and off to market.

The mines thrived with foreign investors. In 1894 he had an Act of Incorporation passed by the Nova Scotia Legislature for the Broad Cove Coal Company Limited. He assumed the role of Manager and Treasurer of the newly minted company and went to work buying land around the wharf and mines, erecting a narrow gauge railway along the ocean to the wharf, a distance of two miles. Within three years the community was buzzing with energy and independent merchants ready to take advantage of the mining boom along the western coast of Cape Breton. Coal was King in the community and the King was Willian Penn Hussey, the American who had breathed life and meaning into the rural community.

Against this came the people, their customs and their hard working attitude to help develop a community on the shores of the Gulf of St. Lawrence.